The Waiting Room Project is open to anyone. I have posted several photos here taken by other people. Some were sent to me, and some I have discovered. I was cruising my Facebook page the other day and came across this one. It is a friend’s family caught in automotive waiting room hell. Here’s the story:

“Hi Ed, so here are the details. We were driving (from New York City) to Maryland with our daughters to spend the 2nd Seder with My Brother and his Family. We had Tupperware bowls filled with homemade chopped liver, egg noodles and tons of deserts ( hard for my Bro to get in MD). My SUV started making strange noises so we found a mechanic and waited 2 1/2 hrs for car repair. We did not make it to Maryland but went out to dinner with the girls and after a martini and fries we felt a little better but still very disappointed that our Seder Plans got waylaid.”

I expect from the look of these folks, this photo is somewhere around hour 2. It perfectly captures the resigned desperation of uncertainty. How much longer will they be there? No one knows. Thank you, M. for letting me share this.

If you have a photo you want to share, please use the contact form, and I’ll be delighted to do so. That’s what makes this Project everyone’s.

I don’t know what happened to the chopped liver and the egg noodles, but knowing how delicious they must have been, you can only guess.

What is that car doing in the waiting room? Oh, wait, it’s the showroom for Santa Monica VW. This is the beautifully appointed part of the dealership where they actually sell you the car. You wait here for your sales associate to come out of the depths of the building to introduce you to your new set of wheels. They ply you with beverages and snacks, take you on the test drive, negotiate the deal, and have you wait while the finance department prepares your paperwork. Once you have agreed to buy the car, they usher you into a small, bleak, airless cubicle where the 3-foot long contract comes spitting out of the antique daisy wheel printer, along with the opportunity to add a myriad of options, protection plans, upgrades, and service contracts. An hour later, and several more hundreds of dollars poorer, you emerge with the keys to your new car.

I was here with my Mom shopping for a new station wagon for her. She has driven station wagons, and only station wagons, for as long as I can remember. In the 60’s it was a brilliant blue Chrysler behemoth bigger than a Hummer. I learned to drive in that gigantic thing. In the 70’s she drove a metallic pink Toyota. For the last 13 years a metallic green VW Passat with orange flames on the fenders and rear panel. We found her new car, a lovely dark silver VW loaded with all the latest technology. More like a computer on wheels.

The last new car I bought was my ’93 Jeep Grand Cherokee. Full-time four-wheel-drive and automatic everything. What a great car. It took me to work in Burbank through epic floods. It took us to the snowy summits without having to get out and grovel in the snow putting on chains. It took us on many a memorable camping trip from the majestic Sierra Nevada mountains to the blazing deserts of Death Valley and Joshua Tree. I currently drive a 15-year-old Lexus that I inherited from my Dad. It hums along, quiet as a top, and rarely needs any service beyond routine maintenance. I expect I won’t be seeing the inside of a car dealership waiting room for several years.

Jury Duty. That pale green summons that strikes fear and anguish into the heart of every citizen. In years past, you had to report on the Monday of your weekly commitment of service and wait for your name to be called. Or as many of us wish, to not be called. But you have to wait. And wait. In what is usually an institutionally bleak room along with scores of other prospective jurors.

In all the years I have been reporting, I have never been empaneled. I came close a few years ago. A group of us was called and I actually sat in the jury box during the “voir dure” where attorneys ask questions of the prospects to weed out anyone they deem might produce an unfavorable result for their client. I was to be juror #8. The D.A. read a summary of the charges as the defendant sat there stone-faced. The charges were horrific. Crimes against a 14-year-old girl I won’t detail here, but they were as bad as you might imagine, short of murder. We all looked at each other aghast. The unspoken agreement passed between all the jurors. Guilty or not, we were going to fry this guy. The questioning of the jurors proceeded until time for the daily recess. We all had to report back the next day. When we arrived in the morning, we were told there had been a delay. We sat around until late in the afternoon when a marshall came in and told us we were all excused, they had struck a plea bargain. What a relief.

Now, they have a system whereby you can register and take the orientation online and call in every evening for a week to see if your presence is required. Last year, I missed the final day’s call-in, and later received an imperious summons to report without fail the following week or face criminal charges. So I sat in the room pictured above with about a hundred or so people all staring at their phones. No one spoke with anyone else, no human interaction, just the soft tapping of fingers on screens.

Once you report and if you aren’t called, having sat there for a day, you are then excused; you have rendered your service, and are exempt from recall for another year. As I was this day.

I am expecting my next summons any day now.

Shopping can be exhausting. Trying on clothes is a part of that exhaustion. Take off the pants, pull on the new pants. Do they fit? Do they look good? Yes? No? Take off the new pants. Pull on a new pair of pants. Ask the same questions. Rinse and Repeat. Fortunately, this store provides a handy bench to rest your weary bones while your shopping partner persists in his or her quest.

I met a friend in Century City to pick up a camera I was borrowing from him. With my car idling at the curb outside the Fox Studios parking structure, a very unpleasant Parking Enforcement dude gave me a ticket for parking in a red zone. I went to this office to contest the ticket as by definition I wasn’t parking, but standing, because 1.) the car was still running, and 2.) I was actively loading the equipment into the trunk of my car. I got an affidavit from my friend to this effect, went online to research the exact wording of the ordinances, and showed up with my sheaf of paperwork and supreme confidence I could convince the judge to reverse the citation.

Through that door are the offices of the examiners. They aren’t judges, but civil employees who interpret the law. Mine was very friendly, listened to my plea politely, and collected my evidence. About two weeks later, I got the letter that denied my claim on the grounds that even though the car was running and I was present, the fact that I had waited for him to walk from the structure to my car constituted parking, and I had to pay the fine.

If I had said he was waiting for me, and I pulled over to pick up the camera, I probably would have beat the ticket.

Saw this patient little doggy waiting for his person in the Bank of America last year. I was taking care of some old banking business and couldn’t resist. I think dogs spend a lot of their time waiting, but not in the self-aware kind in which humans wait. I don’t think they know what they are waiting for, or that they are even waiting. Like a cat who crouches under a bush waiting for a bird to land, they are simply doing. What do you think? 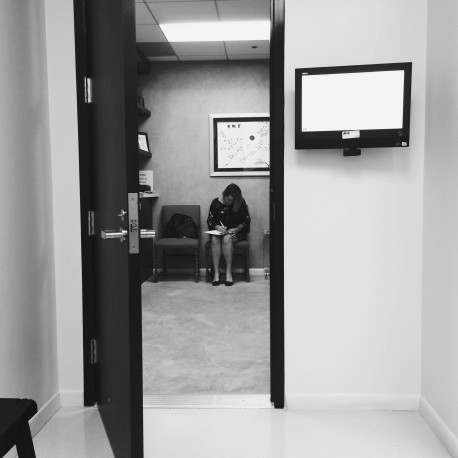 I have been wearing glasses since the 5th grade, and have been through the developing technology of contact lenses for the past 50 years. I now have extended wear disposable contacts which I love. Contrary to Dr. Chen’s recommendation and in line with the manufacturer’s, I often sleep with them in place. Dr. C wants me to take them out every night, something I did for years and years. It is a mild inconvenience which I don’t wish to impose upon myself. We have reached a compromise in that I do remove them a couple of times a week to give my eyes a little more oxygen, and have switched to a very aggressive hydrogen peroxide cleaner that bubbles and fizzes away the gunk.

I usually visit her once a year in September for my annual check up. That’s when I snapped the first photo. Clearly, this woman has had her fill of waiting for the day.

In February of this year, I developed a strange bump on one of my eyes, and off to Dr. Chen I went. It was sun damage caused by years of outdoor exposure. After some antibiotic drops and a break from my contact lenses, it subsided. While I was waiting for her, I took the second picture of a new patient filling out the first visit paperwork.

I was at the bank waiting to notarize some documents, sitting in a chair opposite this. Not much to comment here, but I like the image.

In our last installment, we found ourselves roaming the hallways of Justice in Inglewood. On the way out of the building, in which cell phone cameras are not allowed, I managed to snap this surreptitious shot of the main lobby just inside the front door. This is where you come for minor traffic citations, and this morning, as it was early, there were few people. You can see the metal detectors and x-ray conveyor on the left side. I was initially disappointed when I had a chance to review the photo on my phone once I had left the building, but after seeing it full size on the computer screen, it began to grow on me. What do you think?

I was roaming the halls of the Inglewood courthouse after filing a small claims action against a local restaurant and discovered this tableau. That is another story altogether, but once trapped in the bleak, marble-lined hallways, there are many opportunities to wait while the wheels of justice grind away. And grind they do. Here on the 6th floor, you can rest your weary self on the hard, unyielding bench, dispose of your sandwich wrapper, mail a letter and then make your way to the office to file whatever legal action brought you thence.