By now, I was on the lookout for waiting rooms, waiting benches, waiting stools, waiting lines, any place that had been designated, however vaguely, as a “waiting area”, my iPhone at the ready. I had it pre-set to one of the black and white combinations that I was using. Often these photos were taken surreptitiously, no more than a quick glance at the screen and a touch of the shutter button. Many times I would only take one photo. Sometimes I had the luxury of several, choosing the best when I had the leisure to look at them on the large screen of my computer. After my initial appointment with the oral surgeon of the last post, I was walking down the hallway toward the elevator when I passed this doorway and was immediately captivated by the image. I wondered what the woman was doing. Was she talking to someone? Was she getting something out of her purse on the chair next to her?  Was she a patient or was she waiting for someone else? As I didn’t want to be discovered taking pictures, I snapped this one photo; I didn’t linger to peer in to answer the questions. I preferred to leave them unanswered to be asked and answered by the viewer.

In June, we celebrated my wife’s birthday at a very upscale restaurant in Santa Monica with my mother and Jake. At the beginning of the meal, I bit into a piece of olive bread and a pit hidden inside cracked one of my teeth. It was the beginning of a two-year adventure attempting to get compensation for the damage, a story for another time. The very next day, I visited my dentist (the photo on the left) for an evaluation, and waited in one of those chairs. He determined that the damage was so extensive I needed the tooth extracted and an implant put in. He referred me to an oral surgeon (the photo on the right) and I had the surgery a few days later.  Six months later I had a titanium insert screwed into my jaw and a shiny new crown. Note how many more patients the surgeon anticipates than the dentist. This is one of the first pictures that has another person in the shot. I also took a photo of the empty room, and the presence of the person lends a different import, so I amended my “rules” to include rooms occupied and unoccupied.

This is the waiting room of the doctor who performed the spinal injections for Jake. The actual procedure happened at the downtown hospital, but we went to visit the doc here in the fashionable USC medical building on Wilshire in Beverly Hills. Or rather on the edge of Los Angeles that abuts Beverly Hills. Two views of the same office, one looking east one looking west. The left-hand photo is the east view, with the large window on the right. It was part of the group of the first photos as I was finding my way with the concept. I particularly liked the light and the ‘living room’ feel of this area. The frosted glass door in the right-hand west view photo led into the offices proper. What was unusual is that every time we visited there was never anyone else in the waiting room.

This is the waiting room at the UCLA Santa Monica medical center pictured in the 12 Chairs post. This room was so large, it had 4 or 5 different areas with different decors and furnishings in the same room. There was something about the shapes and arrangement of these chairs that inspired me to shoot a second photo of the same room two months apart. There was an area with a coffee and tea maker, microwave oven, and a soda machine; I guess the powers that be at UCLA knew you might have to camp out for a while when they set up the  room. At other times when we visited, there were families with children picnicking at the tables, people working on computers, doing their homework, a regular mecca of activity. This was in the “empty room” phase so I had to work to get a picture without people. We would visit a few more times before Jake decided to abandon the UCLA system in favor of USC. As a former Bruin UES elementary student, I was aghast, but he preferred the doctor. 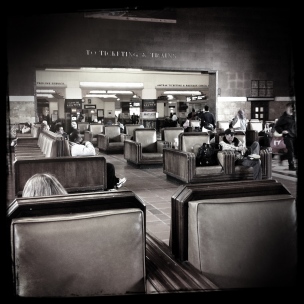 The rest of the photos from the Union Station day. This  is the only time I went to a place specifically to shoot for the project. I could have spent all day there, each photo tells its own story, each person is there waiting for something or someone. The  picture of the bride isn’t exactly about waiting, but the image was so compelling I had to include it.

As the project progressed, I developed “rules” for the game. The photos had to be taken with the iPhone. I had to use the Hipstamatic app and the photos had to be in black and white. It had to be a waiting room in which I found myself, and at first, I strove to photograph only empty rooms. We were downtown for lunch one day and decided to break the last two rules by going to Union Station to shoot the beautiful art deco main waiting lounge. Of all the photos I took that day, this one stood out as the best of the lot. The woman and son wait for their train, he dwarfed by the huge overstuffed chairs. She rests warily, her foot on her duffel bag lest someone try to snatch it, leaning as close as she can to her son, still protecting him in her sleep. The activity of the other people swirls around her as she finds a moment of repose in the hectic station. I will post the rest of the select photos in a gallery post to come. 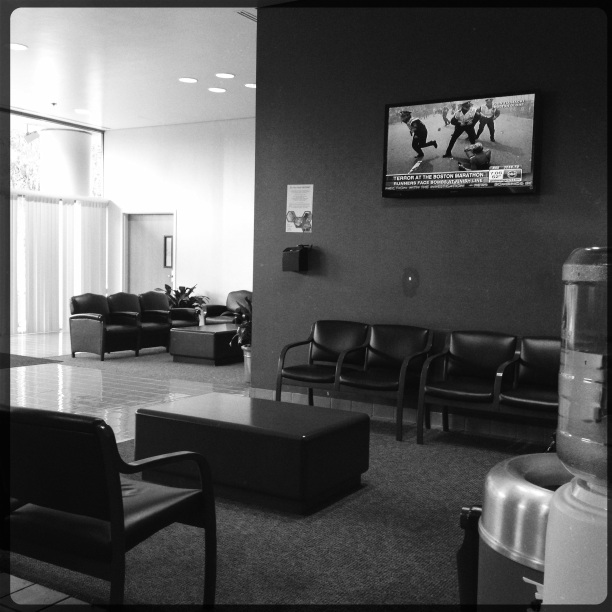 This is where Jake received treatments for his back. The USC Spine Center east of Downtown LA. We were there for his first treatment early in the morning of April 15. There wasn’t a soul in the huge waiting room. It was kinda eerie. While he was getting treated with an injection to his spine, I took these photos and several more. There are dozens of little waiting areas scattered throughout hospital along with larger rooms. When you go to USC, plan to wait for a while, wherever you are. If you look closely at the TV on the wall,  notice it is reporting on the Boston Marathon bombing that had happened just hours earlier. Odd how one can capture a bit of history inadvertently. We went back several times for more treatments, but the waiting area was always teeming with people. In these photos, the space waits expectantly for the rush of people that will fill it in just a few moments.