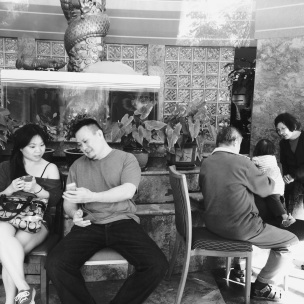 When Empress Pavilion closed, we were distraught. We embarked on a quest to find a replacement for our beloved Dim Sum lunch. Fortunately, there is a multitude of dim sum restaurants in the greater Los Angeles area, and our search took us from Redondo Beach to Monterey Park, from West Los Angeles to Glendale. NBC in Monterey park was high on the list for a while, but they have a limited number of chicken dumplings, and when they changed the recipe of T’s favorite purple sweet potato dumpling, that was the final nail. Din Tai Fung is famous for it’s soup dumplings, the xiao long bao, but they are made with pork, so we couldn’t eat them. There is a place in West LA we tried, ROC (via a Groupon) which makes a chicken Xiao Long Bao. It was good at first, they have a stir-fried rice noodle dish that is delicious, but faded after the first few visits. We tried a couple of venerable places in Chinatown, one in Redondo Beach that had gotten good review by Jonathan Gold, but time and again we returned to Ocean Seafood, another Chinatown institution.

These photos show the difference in energy between an empty waiting area and the same room filled with people. In both, the first shot is while we were waiting, the second one of vacant chairs is after lunch, as we were leaving.

One fine June day in 2013, we were downtown on our regular monthly run for dim sum and tea. Empress Pavilion was long gone, we had lunched at Ocean Seafood. They have the best selection of chicken and vegetarian dumplings in town, and since we don’t eat pork, it had become our favorite. Next door to Ocean Seafood is the Wing Hop Fung market. Two floors of Chinese foods, liquor, herbs, housewares, beauty supplies and tea. We go for the tea. Hundreds of varieties in tall cylindrical jars with heavy glass lids. Black tea, green tea, white tea, Oolong, herbal tea of every variety you can imagine, expensive Pu-erh tea in large black cakes, beautiful tea blossoms that bloom in your teapot. We discovered a particular Oolong we favor years ago, Wudong Phoenix Honey Orchid Oolong, and stocked up. It is somewhat expensive, but delicious and you can only get it at WHF. Once back in the car, we were heading south on Hill street when I spied this “procession” of people. Not exactly a procession as they weren’t going anywhere. We couldn’t figure out if there was a leader, couldn’t really get a handle on what was going on. We didn’t know what they were waiting for, not at a bus stop, but they were clearly waiting for something. We pulled over and I shot several pictures and this little triptych seemed to capture the mood on the street.

This is the waiting area next to the bar at the Empress Pavilion, what was once our go-to Dim Sum restaurant. We would often go there with Jake on a Sunday for lunch. It is a huge place with a cavernous dining room that was packed with noisy diners nearly every day. On a busy Sunday, you might wait an hour for your table. Red-jacketed ladies pushed steaming carts, laden with towers of gleaming silver steamers filled with translucent dumplings, to and fro between the tables. Har Gow, Chicken with Pine Nuts, Gai Bao, Rice Noodle with Fish, Sticky Rice in Lotus Leaf, Chicken Pies, Fun Quor, these were some of our favorites. Many of our best times with Jake revolved around food and eating.

In our family, food is more than just something to eat. It is a creative expression, an act of love. We cooked with Jake from the earliest age, and there are some wonderful stories that involve Jake and the kitchen. He ended up going to culinary school and worked in some of the best restaurants in Venice for a while. Sadly, the Empress closed a couple of years ago due to rising overhead. It has re-opened recently but is only a shadow of its former glory. Its closing propelled us on a quest to find a replacement. We traversed the LA area from Redondo Beach to the San Gabriel Valley, and finally found our new favorite, Ocean Seafood right down the street from the Empress in downtown L.A.