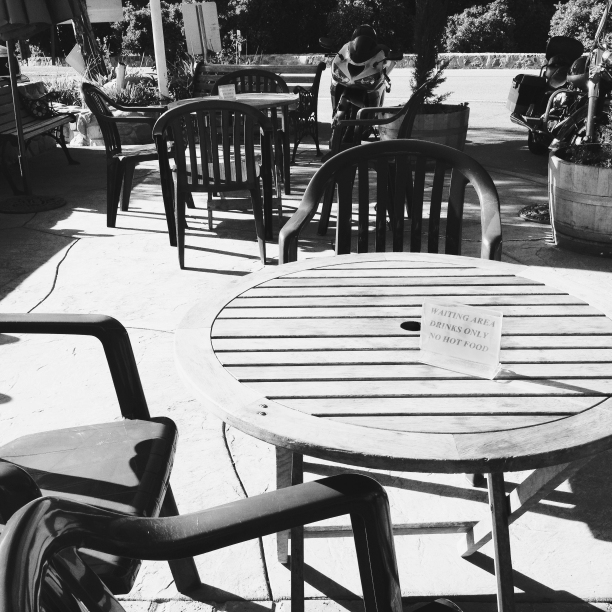 After Jake’s passing we were devastated, distraught, depressed, in the agony of grief. We needed to get away from this house, from the overwhelming absence of our son. Every place we thought about going was fraught with memories of family trips with Jake. We were paralyzed. Our dear friend E. suggested we get away to Ojai. She owns a beautiful cottage in Miners Oaks, a hamlet just west of the Ojai center. Three weeks after the funeral, we were finally able to think about going, we packed up our car and made the short trip north.

The cottage sits on a large piece of property surrounded by fruit trees and towering ancient oaks. This was a place Jake had never been. There were no haunted ghosts lurking, no memories of wonderful times gone by. It was a neutral place. Just what we needed.

We managed to eke out a bit of solace from the unspeakable events of the previous weeks. Still too shell-shocked to do much of anything, we were able, nonetheless, to have a few meals out, do a little wine tasting, visit Meditation Mount, a beautiful serene retreat atop a ridge that overlooks the entire valley.

We would return several times that first traumatic year, every six weeks or so. We found a routine and rhythm to the visits – dinner at a favorite restaurant, shopping at the farmer’s market, picnic at Meditation Mount. Mostly we just laid low. The photographs represent three trips to three restaurants and a shot of the main street colonnade.

We still visit from time to time, but having that place to run away to that first horrible year was a blessing and a godsend. Thank you, E. for your gracious hospitality.

The stairs lead up to the Grind Burger Bar on Palm Canyon Drive in Palm Springs. Jake had moved there at the beginning of the month and we would make the 2 hour drive out to visit him every week or so. Our visits included the obligatory dinner with full restaurant critique. Dining with the three of us was always an adventure, and woe betide to the chef who didn’t get our order exactly right. Burger medium instead of medium rare? Send it back. Fries lukewarm? Send them back. Pasta overcooked? Send it back. Why bother eating if the food isn’t what you want. Especially if you are paying for it. Jake was a professional chef and for a while worked in some of the very best restaurants in Venice. T and I both cook and we expect our restaurant experience to be at least as good or better than what we cook at home. It rarely is.

Our first foray to the Grind was okay. The burgers were pretty good, juicy, flavorful, and the garlic fries were delightful. Our second try wasn’t as successful. T’s burger was overcooked, the fries were cold; I can still hear Jake saying, “Send it back, Mom.” I hear him in my head any time we dine out and the food isn’t what we ordered or cooked properly. “Send it back, Dad.”  We had to send her burger back twice. If a restaurant that specializes in burgers can’t cook a flipping’ burger properly, they shouldn’t be in business. They’re goddamn professionals, supposedly. In fact that last time, we actually had the chef come out and promise to personally cook our food. It turned out okay, it was more like we were just tired of pointing out the failings. Needless to say, we never went back.